Since the pricing usually dominates at least the first part of any conversation about the car, we'd better get that bit over first. The list price of the Abarth 695 Biposto starts at £32,990, which may at first sight seem rather a hefty sum for what is essentially a Fiat 500. An unusually powerful one, admittedly.

Like all 500-based Abarths, this one has a 1.4-litre turbo petrol engine, tuned in this case to produce a maximum of 187bhp. You also get highly uprated sports suspension, tremendously effective Brembo brakes, lightweight 18-inch OZ wheels, a rear roll cage and an Akrapovic exhaust system which makes the car sound very grown-up and serious.

You don't, however, get a radio, or air conditioning, or even a 12v socket. These have been ditched in the interests of saving weight, which is also why Abarth supplies only two seats (hence "Biposto").

The options list doesn't allow you to do anything about that, but it does open up a new range of possibilities which will be of particular interest if you want to do some track work. Abarth can supply you with many other goodies, including Sabelt competition seats, four-point safety harnesses, a crash helmet, a data logger, polycarbonate side windows, lots and lots of carbon fibre and, most excitingly of all, a race-style dog-ring gearbox.

This race-style gearbox alone costs £8,500. If you specify everything that's available you'll end up spending £53,665. The test car didn't have the polycarbonate windows, but it had everything else, and was therefore worth comfortably more than fifty grand.

There's little point discussing whether this represents value for money. On one level, it obviously doesn't, as the Biposto would struggle to beat other hot hatches costing tens of thousands of pounds less. However, how many other cars can you order from a dealer with equipment that would otherwise have to be bought from specialist motorsport companies? 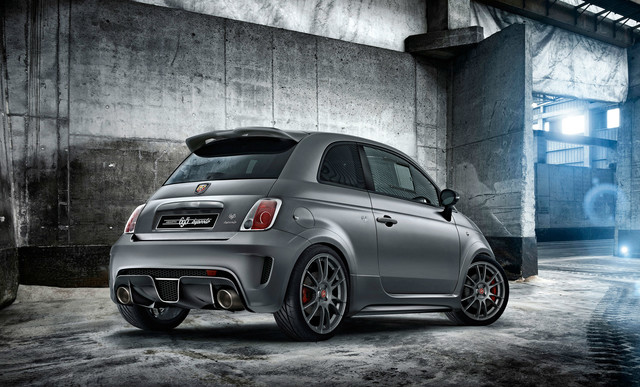 Something else worth considering is that the Biposto isn't going to be on anyone's shopping list as an alternative to a Fiesta ST or a Corsa VXR. In the words of an Abarth employee, it will be bought as a toy by the sort of person "whose second car is a helicopter". Or at the very least a Ferrari 458 Italia.

It looks a bit like a race car, and Abarth likes to give the impression that that's exactly what it is, but it feels surprisingly unlike one. There isn't much steering feel, the exhaust isn't annoyingly loud, and although the suspension is firm the ride isn't jarring. You can make it more so if you like, since the dampers are adjustable, but the standard settings already work quite well on a track and there's little need to fiddle with them.

You can adjust the ride height at the front, but again there doesn't seem much point in doing so. Driven hard, the Biposto provides a roughly equal balance of understeer (which you can usually drive through) and abrupt oversteer. Raising the front would make it understeer more, and lowering it would make it more likely to spin, neither of which seems like a good idea.

If you want to do some serious track work, there's only one way to drive the car, and that's hard. You can have a nice time swinging elegantly through the corners, but you won't get anywhere in a hurry. The Biposto responds best to being hurled around; subtlety simply doesn't work.

I've read that the dog-ring gearbox doesn't allow you to make clutchless changes, but it damn well does, and that's all there is to it. They're not advisable during hard acceleration in the lower gears, though. Even if you do use the clutch, there can be an uncomfortable thump through the drivetrain, leading to an uneasy feeling that something might break next time this happens. Regular clutchless shifting would increase the likelihood dramatically. 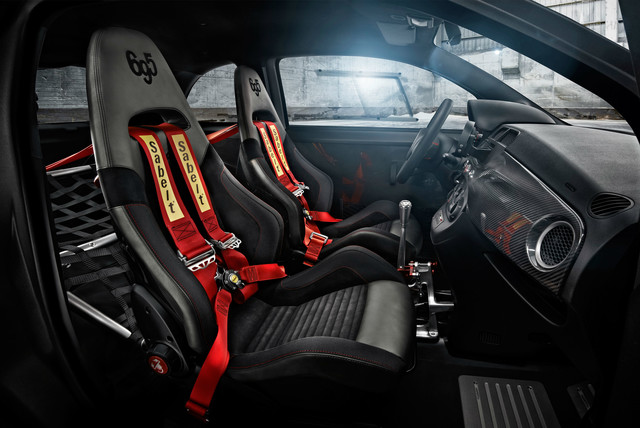 There are five forward gears, spread widely enough to allow a maximum speed of 140mph. I find this odd. Since the Biposto is already a ridiculous car I reckon there would have been a case for making it only slightly more ridiculous by packing those ratios very close together. Therefore, it would accelerate like crazy up to, say, 100mph and then stop. That would better suit the car's character.

You can get from one ratio to the next very quickly, but there's still enough time for the turbo to lose boost. This is largely because the gearbox comes with a racing clutch whose total operation takes place in what feels like the top quarter of the pedal travel.

Quicker changes would be possible if you didn't press the pedal very far, but that's impossible for me. That’s partly because the optional race seat is mounted too high and partly because there is no position where I'm close enough to the steering wheel and far enough away from the pedals. The geometry of the situation means that if I press the pedal at all, it's going all the way down. Height adjustment of the seat and reach adjustment of the wheel would make a big difference, but the Biposto has neither.

You may detect a note of frustration here. It's true that in many ways I find the Biposto a very frustrating car. At the same time, it's a very endearing one, and if I were the sort of person who considered a mid-five figure sum to be loose change I would probably buy one just for fun.

Perhaps most importantly for Abarth, the Biposto inspires conversation. I only had the test car for two days, but everyone I met during the time wanted to hear more about it. I'd be very surprised if any of them bought a Biposto as a result, but not surprised at all if someone decided to order one of the less extreme cars in the range instead.