We've lined up eight of the UK's best-selling electric cars in a retro gaming animation to find out which can travel the furthest. 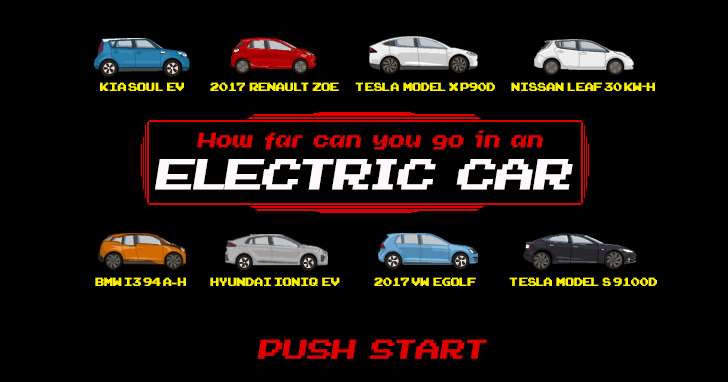 INSERT A COIN TO CONTINUE.

We've lined up eight of the UK's best-selling electric cars in a retro gaming animation to find out who can travel the furthest.

PUSH START on the video below to watch the Electric Cars race:

What is the longest range electric car in the UK?

Here's how the best selling electric cars in the UK finished in our retro animation. Where possible, we calculated the distances using the official EPA figures; if no figure was avilable we used an alternate real world estimate.

How far can a Tesla go?

In the animation we raced two of the best Teslas available, the Model S and Model X. While most people would expect Elon Musk's bright sparks to be in it for the long haul, here's how far you can actually travel on a full Tesla battery:

The 2017 Renault Zoe has had a huge battery boost, almost doubling its older sister's range. However, there is no official EPA range published as of yet, but Renault hopes to last 125-180 miles! The Zoe is even getting a sporty sibling with 456bhp.

One of Britain's favourite electric veichles, the LEAF's 30kW-h battery can travel around 107 miles according to the EPA figures, with an improved 2017 model coming soon!

The race's most heated battle was contested between the eGolf and Ioniq; both are excellent examples of how far EV's have come in the past year, with enviable power, range and style.