It’s the end of an era this May as the London Taxi Company officially ends production of its iconic black taxi, which for the past decade has ferried hundreds of millions of passengers both in London itself and in more than 40 countries around the world.

The image of the black cab is as quintessentially British as that of the Houses of Parliament, the Union flag or Big Ben, and for uncountable numbers of tourists the black taxi is the first thing to greet them upon arrival to the UK and the last thing they’ll see before leaving again.

It’s also one of the most prolific vehicles in film and TV anywhere in the world, with the current TX4 model reported to have starred in more than 5,000 films alone, with screen credits for the likes of the James Bond films, Doctor Who and Sherlock Holmes.

There will, of course, be a replacement for the black cab, but it’ll be very different to the car that preceded it. While the current model is a diesel car and designed to evoke images of the classic black taxi look, the next one will be a hybrid and will largely ditch the retro appearance in favour of a newer, more modern look.

But where did the London taxi come from, how did it become so iconic and why are London taxis usually black? Well, believe it or not taxis have been in London in one form or another for well over 300 years… 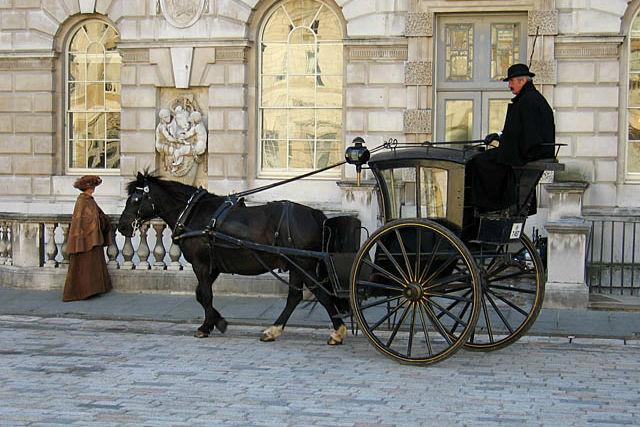 Originally, taxis were referred to as hackneys, a term which originated from the Norman French word ‘hacquenée’ which referred to a horse that was available to hire, and the term persists even with many people still calling traditional black taxis ‘hackney cabs’.

Hackney coaches first appeared on the streets of London in the mid-1600s during the reign of Queen Elizabeth I. At the time, buying and maintaining a coach and the team of horses necessary to pull it was a considerable expense, and so to offset the cost many wealthy coach owners hired them out to members of the gentry for use.

As the coaches aged and were replaced by the owners, the second-hand models were often bought by less well-off innkeepers and merchants, who used them to transport customers and patrons for a cost. Unfortunately, these early taxis quickly earned a reputation for excessive prices and poor quality – a criticism that many taxi drivers today will likely still be used to hearing.

To counter this, the first formally organised taxi rank was set up in 1634 by Captain John Baily, who had served at sea for many years as part of the crew for Sir Walter Raleigh’s expeditions to the New World. Baily put four coaches to work on the Strand and ordered the coachmen to wear a specific uniform and to charge set prices for each journey. 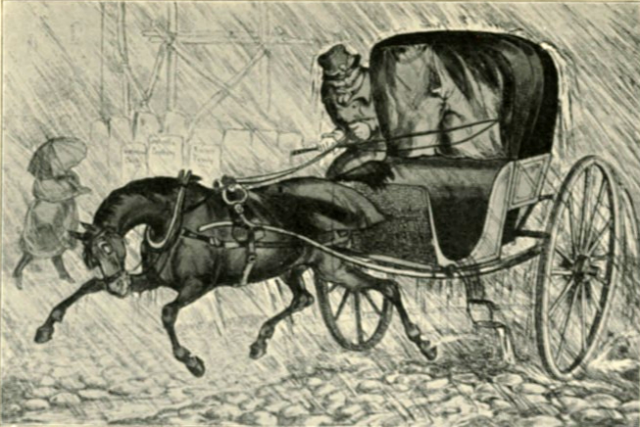 Other would-be taxi owners quickly cottoned on to Baily’s idea and within the next two decades the number of taxi services in the capital exploded. However, few seemed to aspire to Baily’s high standards and so Parliament passed the first regulatory bill for taxis in 1654, the ‘Ordinance for the Regulation of Hackney-Coachmen in London and the places adjacent’ in response to the “inconveniences” and “irregularity” of coach drivers in the central London area.

By the 1760s there were more than a thousand licensed taxis on the streets and the coaches garnered the nickname ‘hackney hell-carts’ for the erratic behaviour of their drivers and the often sketchy quality of the coaches themselves.

However, advancements in technology were made with the introduction of the two-wheeled ‘cabriolet’ carriage from France – a term which is still used to describe cars with convertible roofs today – in the early 1800s. Cabriolets, and the later hansom carriage, had the benefit of being faster and more agile than earlier four-wheeled coaches, while they could also be pulled by a single horse to reduce congestion. 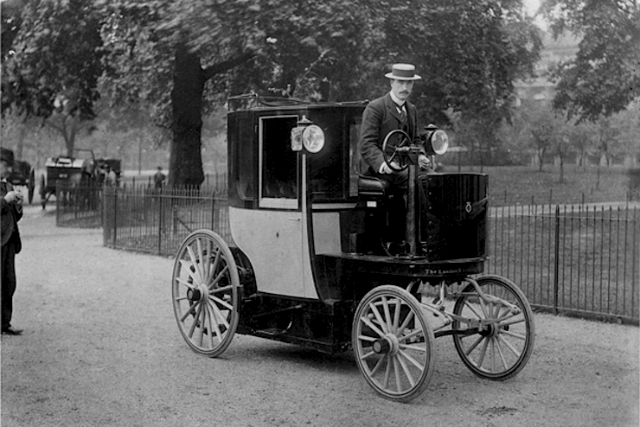 The first motorised taxis were introduced to London in 1897, and believe it or not the very first motor cabs were actually electrically powered. Nicknamed ‘Berseys’ after their designer Walter C. Bersey, fifty of these electric taxis were at work in the city within the year, however they proved too costly and too unreliable and were taken off the streets by 1900.

London’s first petrol taxis were introduced three years later, imported from France. Taxi companies had previously attempted to import the Ford Model B from America but failed due to the huge expense, though other early taxis of the time were built by British companies like Rational, Herald and Vauxhall.

These carriages officially became known as taxis around 1906 when the fitting of taximeters to display fares was made compulsory, while the famous small turning circle of the London cab was introduced as part of the Public Carriage Office’s ‘Conditions of Fitness’ regulations in 1906, which declared that all taxis must have a turning circle of 25 feet at maximum. 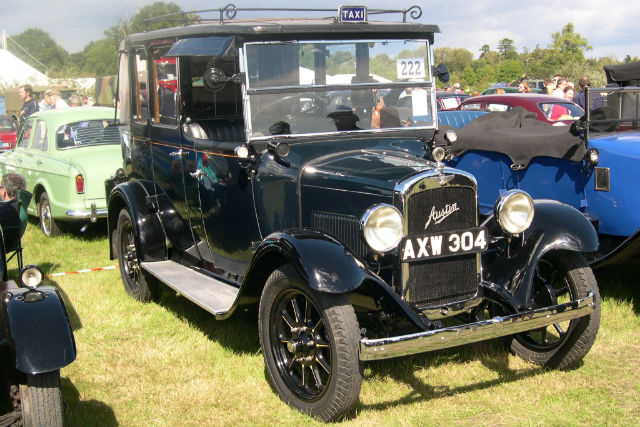 Over the next couple of years, the taxi trade exploded in popularity, though it came close to ruin multiple times, first following industrial action by cab drivers in 1911, by fuel shortages in 1913 and later by the outbreak of both the First and Second World War.

Young men who were fit enough to drive taxis for a living were deemed fit enough to fight for their country and so the majority of drivers were called up to serve in the army, while production of the vehicles themselves ground to a halt as factories across the country were converted to produce munitions.

However, in the years between the wars the trade once again increased in popularity, with the first Austin taxi built in 1929. Based on the successful Austin 12/4, it became the most successful taxi cab to date and Austin would go on to produce the FX3 in 1948.

Why are taxis black? 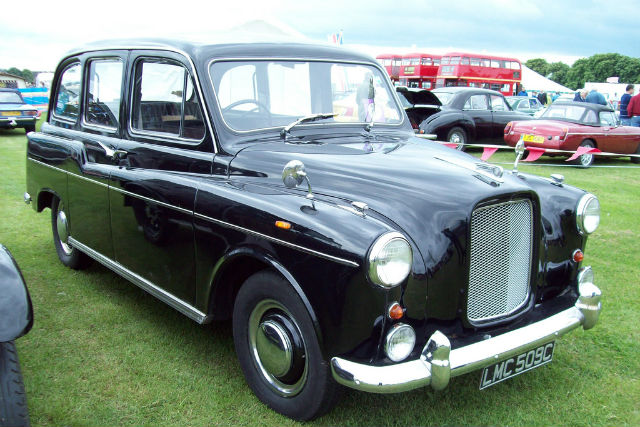 The FX3 was built by Carbodies in Coventry and became the first iteration of what we known today as the ‘classic’ London taxi with its characteristic silhouette and the orange roof sign, which originally read ‘For Hire’. FX3s were originally powered by petrol engines, but this proved too uneconomical for the high mileage taxi drivers typically put in, and so in 1954 Austin swapped it for a diesel.

As well as setting the tone for the general proportions of all black cabs since, the Austin FX3 is also the reason why all London taxis tend to be black in colour. Up until 1948, taxis were produced in all sorts of different colours, but the FX3 was produced in black as standard with buyers having to pay extra for special colours.

For fleet owners, who would typically buy large numbers of the vehicles, the extra cost proved an expense too far and so the vast majority of FX3s on the streets were simply left the standard factory black. These days, it’s not uncommon for taxis to come in all sorts of colours and liveries but they’re still unequivocally referred to as ‘black cabs’ all the same.

In 1958, the FX3 design evolved into the FX4, which still serves as the basis for the modern TX4 models. Probably the most famous of all London taxi designs, the FX4 proved so popular that it remained in production for nearly 40 years, and it’s not uncommon to still see original FX4s on the road today. 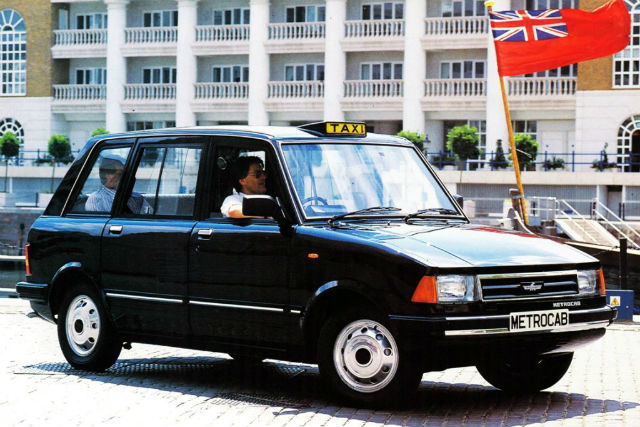 Other taxis of the time included the Metrocab, which was introduced in 1987 and produced under license by four different owners throughout a 20-year period, though it was the models based on the original FX3 and FX4 which proved the most popular and the most enduring.

Carbodies, the company which built both the FX3, the FX4 and its successor models, was merged into the London Taxis International (LTI) company and as of 2010 was rechristened as the London Taxi Company (LTC), which still builds the taxis in Coventry.

Over the past six decades more than 130,000 black cabs have been made at the Coventry facility, with between 2,000 and 2,500 built each and every year. Around two-thirds of the cars produced go straight to London via a dealership in Islington, while the remainder are sent to other cities in the UK or to foreign markets keen to capitalise on the evocative look of the London taxi.

The future of the black cab 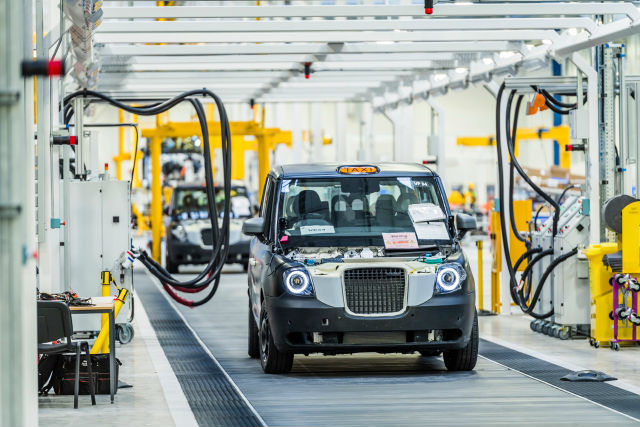 Unfortunately, production of the TX4 in Coventry will cease at the start of next month, but it’s not all bad news for the black cab. Last year, LTC’s parent company Geely invested close to £300m in a new plant five miles from the original facility to build the follow-up to the TX4, which will reportedly be called the TX5.

Powered by an electric motor in conjunction with a small Volvo petrol engine, the hybrid TX5 will be able to seat six passengers, will be fully wheelchair compatible and will be able to travel on electric power alone for more than 70 miles. Certainly, it seems a long way from its predecessors, but then given that the first motorised London taxis were electric cars, perhaps it’s not that far away after all.