Will Group B rally ever come back?

Group B rally died on 2nd May 1986, killed alongside Henri Toivonen and co-driver Sergio Cresto on a notoriously treacherous left-hander during the second leg of the Tour de Corse, the “rally of 10,000 corners”.

Exactly how Toivonen and Cresto’s Lancia Delta S4 left the road remains one of the greatest mysteries in motorsport. There were no marshals nearby, no spectators or any other witnesses, and the only video footage taken was shot so far from the accident that no real conclusions could be drawn from it.

Toivonen’s peers claimed he was feeling unwell with the flu on the day, but that his performance on the Tour de Corse’s opening day was unaffected.

The Delta S4, one of the most iconic Group B machines of its time, was a notoriously vicious car, with an Abarth-designed supercharged and turbocharged 1.8-litre engine which produced 500bhp and which could take the car from 0-60mph in a fraction over two seconds on gravel. 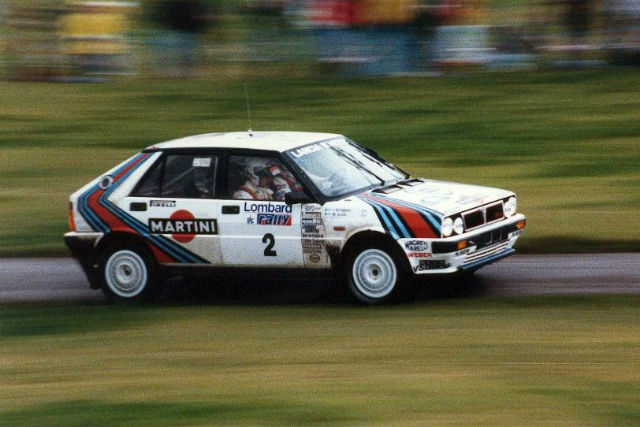 All the same, Toivonen had taken stage win after stage win and was leading by a large margin. Prophetically, he said at the time that the rally was going extremely well, but: “If there is trouble, I’m as good as dead.”

Whatever the cause, the Lancia plunged down a steep ravine and exploded. The car’s Kevlar body burnt up extremely fast and the fuel tank, which had its protective guard stripped to save weight, was pierced in several places by trees and abruptly detonated.

The only remains of the car and its occupants was the blackened spaceframe. Toivonen and Cresto died still strapped in their seats. 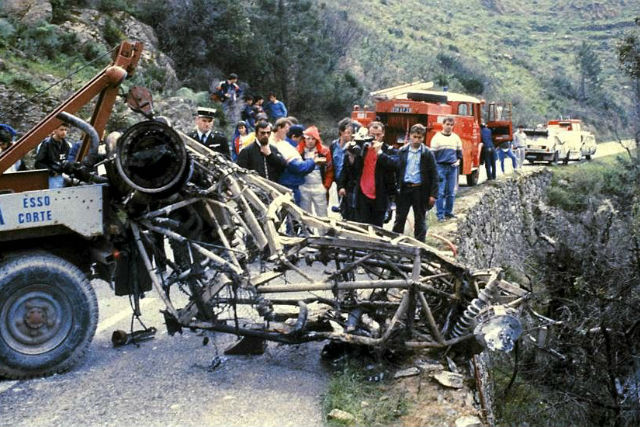 The death of Group B rally

Within hours, FISA, the FIA’s division in charge of motorsports regulations at the time, announced that Group B cars would be banned from competing in rally from 1987. Ford and Audi withdrew their cars immediately, while the remaining manufacturers scrapped theirs at the end of the 1986 season.

An official investigation from the FISA later found that drivers’ reactions were just too slow to keep up with the pure power of the Group B cars, and that they were so fast that the drivers couldn’t adjust their eyes between corners, leading to tunnel vision. So ended the most popular period that rallying has ever seen.

Group B’s origins began in 1979 when the FISA made four-wheel drive powertrains legal in rallying. One year later, Audi wowed the world with its hugely successful Quattro, and in 1982 new regulations opened the door for what would become true Group B cars.

The requirement for road car homologation was lowered to just 200, compared to the 5,000 cars a manufacturer would have to produce in order to field a Group A car. Restrictions on technology were almost completely nullified and there was no limit on the materials used or on how much boost pressure the turbochargers or superchargers could make.

As a result, manufacturers used this as a playground to test new and state-of-the-art technologies, and the cars used in the Group B era were true monsters. Advanced, all-wheel drive machines made of aluminium, magnesium and Kevlar, Group B rally cars were faster than Formula One cars at the time; beasts barely controlled by their drivers and where the only limitation was the skill of the human sat behind the wheel.

For many rally fans, the Group B era is still the pinnacle of the World Rally Championship, a four-year period that burned briefly but brightly, where manufacturers were allowed to do whatever they wanted and where the sport came close to rivalling F1 in popularity. 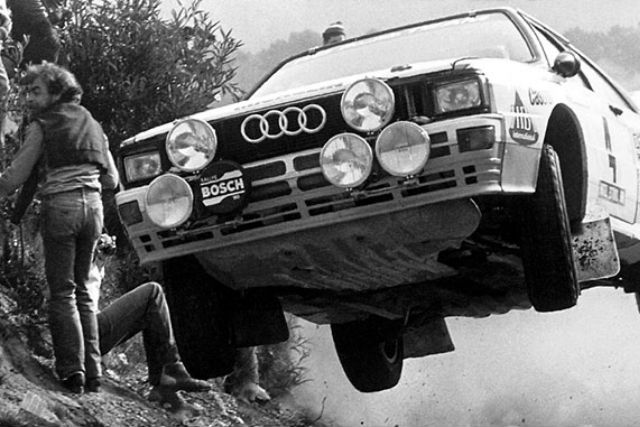 The unfortunate but natural result of that meant that as soon as Group B was introduced, the number of rallying accidents began to swiftly rise. In 1985, the first near-fatal crash came after Ari Vatanen lost control of his car during the Argentinian rally, suffering extremely serious injuries.

Vatanen broke multiple bones including vertebrae in his neck and back, eight ribs and a crushed knee and required an eight-hour operation and a total of three blood transfusions.

Lancia driver Attilio Bettega became the first person to die as a result of Group B the same year after crashing in the Corsican rally. However, by that time manufacturers had begun to realise the huge marketing potential of these rally supercars, investing huge sums of money into them to make them go even faster. 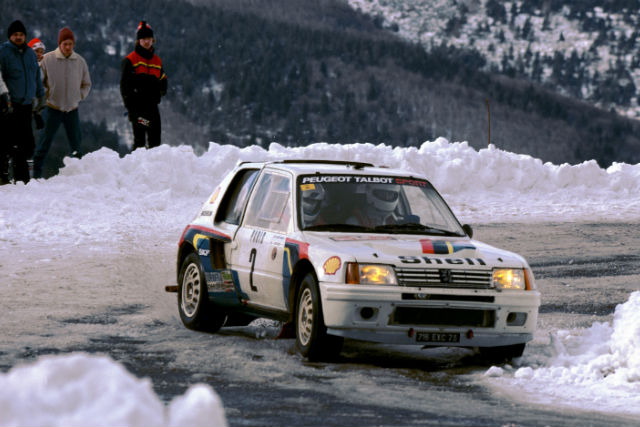 The cars went down an absolute storm with spectators as well, with pictures of cars like the S4, the Quattro and the mid-engined Ford RS200 lining the bedroom walls of motorsport fans the world over. As the number of spectators increased, so did the fervour of the fans, with some throwing themselves into the middle of the rally stage to get a close-up picture of their favourite car in action.

In the 1986 Portugese Rally, Ford driver Joaquim Santo plunged his RS200 into a crowd of spectators, killing three and injuring a further 31. All teams immediately pulled out of that rally, but the championship continued regardless.

It came as little surprise then when Toivonen and Cresto’s deaths proved to be the straw that finally broke the camel’s back, something which many believed was long overdue. Since then, Group B rally has been banned and the world has never seen anything quite like it again.

Rally might have had its heyday in the 1980s but the world has changed a lot since. Compared with the Group B era, the amount of money pumped into the WRC has steadily and dramatically dwindled, as has its popularity.

Likewise, the attitudes of manufacturers and drivers has changed a lot too, with an increased focus on safety but also more attention paid to perfecting stage times rather than aiming for the wow factor. As a result, it’s unlikely that Group B will ever return, despite the fact that pundits and fans alike are keen for change in WRC regulations.

Current cars have too much grip and not enough power, many say. They’re more advanced than ever, faster down the stages but they demand the sort of smoother and less flashy driving style pioneered by the likes of Sebastian Loeb. 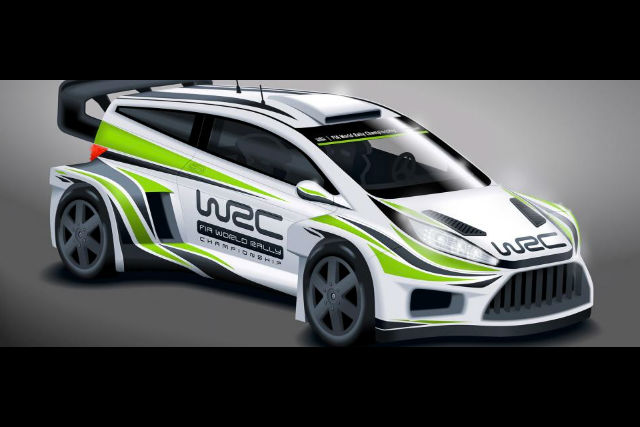 Will Group B ever return?

In response, the WRC announced a set of significant rule changes to be introduced for next year, aiming to hark back to the heyday of rallying with faster, more powerful cars and more flamboyant appearances with big aero packages and larger rear wings.

Power will rise from the current 330bhp to 380bhp thanks to a larger turbocharger restrictor, while the cars will be lighter and will be allowed a 55mm increase in their width, along with larger overhangs at the front and rear. In other words, it mightn’t be quite as outrageous but this will be the closest the WRC will have gotten to Group B since it was banned.

The aim: to make rallying more spectacular according to the FIA, while also being mindful of cost and safety considerations, hopefully striking the perfect balance between the impressiveness of the Group B era while adapting it for the modern world.

So what of the original Group B cars? Despite being banned from rally, some that survived purging by their manufacturers soon found themselves in rallycross events, where the more flexible rules and the safety benefit of a closed circuit allowed their sheer brutality to be better managed.

Horsepower was often boosted up to as much as 650bhp for even more drama, with the result intense, flame-spitting racing. There are still several events in the UK that feature Group B cars, but they’ve never again since graced a rally stage and it’s unlikely they ever will again.

Will Group B rally ever make a return? Probably not, but in the three decades that have passed since the monsters of rally’s greatest age are survived by the many coveted road cars they spawned, as well as by the pictures, videos and the memories of a deadly but truly magical era.