This version of the 2007 model year Accord proved to be a big disappointment.

In this site you'll find several articles referring to our fondness for the Honda Accord. This review demonstrates how easy it is to spoil a good car.

Diesel technology is still fairly new to Honda - the company spent several years saying it would have nothing to do with those nasty, smelly engines, and then did a significant U-turn when it proclaimed that it had changed its mind and was now going to introduce what was described to me at a Honda dinner as "the best diesel in the world".

Whether it has succeeded is a matter of opinion. The 138bhp 2.2-litre i-CTDi unit in the Accord is a very long way from being the most powerful in its class, but it performs very well at lower revs (responding to instructions from as low as 1000rpm) and, thanks to an impressive programme of noise reduction, it also runs pretty quietly - at least in previous diesel Accords we've driven.

Other positive Accord features include the smooth ride and reasonably perky handling. So you can imagine my surprise when the test car turned out to be clumsy to drive, with horrible ride quality and a tremendous amount of racket from the engine.

This is the EX, the highest form of diesel Accord, and I suspect that if you leave it alone it doesn't suffer from any of these problems. But manufacturers like to load their press fleet cars with lots of options, and in this case the standard 16" wheels with 55-section tyres had been replaced with 17" alloys and 45-section rubers. You can do this too, but as a friend I entreat you with all the passion with which my Creator has blessed me not to waste your money on such a reckless course of action.

The Accord suffers more severely from the fitment of low-profile tyres than almost any other car I can think of. Stray from the rubber the engineers deemed most suitable and the car Does Not Work At All. The suspension - usually an Accord plus point - is confused, the ride falls apart and the increase in noise level has to be heard to be believed.

Mind you, the extra decibels are not enough to overcome the strangest aspect of the Accord's design. I found it baffling, when I drove the first diesel version, that Honda, the world's leading engine builder, had put this car into production without first eliminating the incessant whine created by the alternator drive.

It's even stranger that, three years on, there has been no apparent attempt to do anything about this, and more extraordinary still that the same engine seems to have no such problem when fitted to the diesel version of the Civic Type S. Why should this be?

If you can deal with all this, there is much to be said for the car. It has splendidly supportive front seats, though the extra size which allows this support means there is less room in the rear than there might be, and the fact that sixth gear (added to the Accord gearbox as part of the 2006 upgrade) gives you just under 35mph per 1000rpm helps keep the noise down to some extent on a long cruise, as well as helping fuel economy. 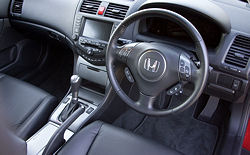 Luggage space is competitive at 459 litres - almost exactly the same as a BMW 3-Series - though the sill is very high and the opening is quite small, which might lead to some cussing if you have to load anything large and heavy.

The EX isn't exactly short of standard equipment. The more significant items on the list are leather upholstery, automatic lights, wipers and interior mirror, powered front seats (eight-way adjustable for the driver, four-way for the passenger), heat-absorbing windows, dual-zone climate control, a properly adjustable steering wheel and - on the test car - a high-level in-car entertainment package including voice recognition DVD satellite navigation, a Bluetooth phone system, a 6-CD changer, eight speakers and automatic volume control depending on the speed of the car.

The options list is extensive, and brings the total number of possible combinations of EX to . . . ooh, lots and lots, I should say.

There are quite a number of styling add-ons including spoilers, side skirts, dashboard panel kits, blue ambient footwell lighting and what not, plus - if you have an extra £1695 burning a hole in your wallet - a comprehensive DVD/MP3-based entertainment system suitable for (a) impressing any VIPs you may happen to have in the back seat or (b) getting the kids to shut the hell up.

If indeed there are kids, Honda supplies a variety of child seats. If there are lifestyle issues, the Accord can be specified with towbars, roof boxes, ski boxes, bicycle lifts and snowboard attachments. And if there are drinks to be protected from the ravages of heat, you can specify a 14-litre coolbox.