Like all the other models in the Kia cee'd range, the SW estate lasted for less than three years in its original form before being substantially upgraded in the second half of 2009. In many ways the SW was already the best cee'd, so the improvements do not seem as dramatic as they do in the five-door hatchback, but there can be little doubt that it is an even more appealing car than before.

Some things have not changed at all. I won't be fully happy with the SW until Kia comes up with a sensible rear-window arrangement which allows the driver to see out when reversing, but since the recent upgrade didn't include any changes to the body structure that was never going to happen, and we're going to have to wait for a whole new generation of cee'ds to be developed before it does.

But I do like the back of the car in other ways. The way the hinges of the tailgate are mounted quite far forward along the roof is very clever, since it means that the leading edge swings through a much smaller arc than normal, is very clever, and the wide aperture, high sill and load volume of over 1600 litres with the rear seats folded down are all major plus points. A Peugeot 308 SW is much roomier, but apart from that there are few cars in the class which can approach the Kia for practicality.

Despite some optimistic claims at the time of the press launch, the new cee'd doesn't have much of a premium feel to it. The revised interior is attractive enough, but it's not very interesting, and the stuff it's made from seems fairly cheap. 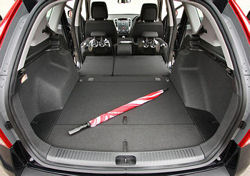 But that makes it feel like a basic car rather than a bad one, and there are many compensations, including a great deal of space for front passengers and a reasonable amount for those in the rear.

The ride quality makes the SW feel more expensive than it is. The pre-upgrade SW already rode well - much better than any other cee'd - but the excellent work done to make the whole range behave in a more composed manner on UK roads has had a positive effect on this one too.

And although few people would be likely to buy an SW for its sporty characteristics, the same suspension improvements have also made it handle more precisely. Even allowing for the fact that it feels a bit top-heavy, there are not many C-segment cars which are more satisfying to drive than this one.

The 1.6-litre CRDi turbo diesel engine helps too. Its maximum output of 113bhp isn't much to speak of, but it's very strong at low to medium revs, which is all that most owners are ever likely to use.

If you bury the accelerator pedal in the carpet, not much happens, but in normal driving the SW never feels slow. The engine is also impressively quiet, and its official combined fuel economy of 61.4mpg is so close to the 62.8mpg of the much slower and equally-priced EcoDynamics version that there seems to be very little choice between the two. (Note, however, that the EcoDynamics is one VED band lower, and will almost certainly be a good deal more economical in the real world.)

The very best thing about the cee'd SW is that, like other Kias, it has a seven-year warranty. But I felt, as it was taken from me at the end of this test, that that is by no means the only reason for buying it.