This is to all intents and purposes the same as the car we tried a little while after its launch back in 2008 (see review). It's worth revisiting now because of a few changes that were made in time for the Geneva Show earlier this year. 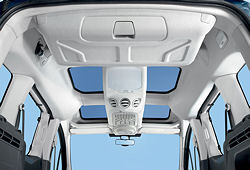 One is that it has been restyled. There isn't a lot you can do to add elegance to what is basically a van with extra windows and seats, but in this form the Berlingo Multispace seems a little less workhorsey than before, at least to me.

The more important development is that, as with the virtually identical Peugeot Partner, the 90bhp 1.6-litre diesel engine has been revised in the interests of lower CO2 emissions.

According to the official EU test, these have dropped substantially from 150g/km to 125g/km, which leads to a £35 annual saving in Vehicle Excise Duty (£155 before, £120 now). Combined fuel economy has likewise improved from 49.6mpg to 54.3mpg.

What hasn't changed is that the Berlingo Multispace is a phenomenally practical device. With the rear seats folded down there is no less than 3000 litres' worth of luggage space, though of course that's partly due to the car's great height which also gives it an unnecessarily colossal amount of headroom. 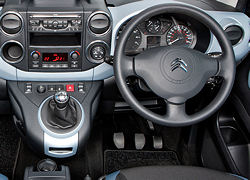 The floor is extremely low, so hauling stuff aboard involves the minimum of effort, but if space behind the car is an issue there's also the option of loading through the separately-opening rear window.

In addition, there are multitudinous storage spaces all over the cabin, including ones in front of the steering wheel and above the sun visors. And you can specify even more by ordering the very clever and useful roof-mounted Modutop.

There are a few negative points to deal with. Legroom isn't nearly as good as headroom, the footrest is too far back and requires you to bend your left knee quite sharply, the sliding rear side doors are difficult to shut from the inside and although ESP (Electronic Stability Programme) is available you have to pay extra for it. 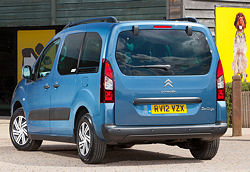 Euro NCAP isn't greatly impressed by the Berlingo, particularly in terms of pedestrian protection and risk of leg and knee injury to front-seat occupants, and awarded it four stars after crash testing it back in 2008. Citroen hasn't raised its game since then, but Euro NCAP has, and there's every reason to think that the Berlingo is now even further from a five-star assessment.

Admittedly, it's reasonably cheap at £14,395, though that doesn't include ESP, the Modutop, air-conditioning, Bluetooth or a USB port. If you want to spend even less, there's a very similar version with a 75bhp 1.6 diesel engine (with the same fuel economy on the EU test, if perhaps not in real life) for £450 less, or the slightly more sparsely-equipped entry-level 95bhp 1.6 petrol VT for £12,795.