Since the DS3 is such a good car, why is the DS4 so disappointing?

I had very high hopes for the Citroen DS4, based on my experience two summers ago of the smaller DS3. That car is well up in my list of favourite hot hatchbacks, and if the DS4 came anywhere near to it I would be very happy. But it doesn't, and I'm going to find it difficult to disguise my disappointment. 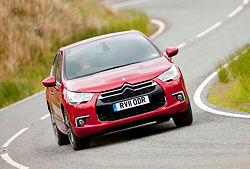 It might seem unfair to classify this particular DS4 as a hot hatch, since it has a diesel engine, but what an engine it is. It's the second most powerful in the range, some way behind the 1.6 petrol turbo THP 200 but slightly ahead of that same unit in THP 155 form, and it sounds so smooth and refined that you might easily question whether it's a diesel at all. Only the fact that the revcounter is already starting to display warning signs from as little as 4500rpm provides a clue as to what type of fuel it actually uses.

The engine is my favourite part of the car, and by no small margin. I'm not a big fan of the styling, though that's partly because the test car - unlike the one pictured here - was black. I don't think black is the right colour for the DS4 because it makes it look quite dumpy.

It's not, however, the only thing that does. There is also the matter of the ride height, which seems excessive by at least two inches. I can get my whole hand between the top of the tyre and the lip of the wheelarch at every corner (when the car's at rest, obviously), and I have large hands. The DS4 is meant to be a sporty car, but the way it sits on the road gives it the air of an SUV.

And this is not just an aesthetic problem. It also dominates the DS4's dynamics. For the first few days of this test I drove on familiar routes, and while the car certainly turned smartly into corners and went through them in a finely balanced manner, it never seemed quite right. Fed up with this, I tackled a local 30-mile single-track coastal road which by rights should be closed for rallying purposes some time. (Not the 30-mile road I've referred to in past reviews. This is another one nearby. I am truly blessed.)

I didn't drive the DS3 here last year, but if I had I'm sure it would have handled magnificently. In fact I can't imagine why I didn't. It would have been so much fun. The DS4 really wasn't. 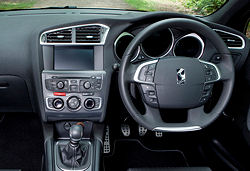 Oh, it gripped well, and it accelerated most impressively out of corners. But there was that damn ride height - or, more pertinently, that damn centre of gravity. It's just too high. Every time I changed either speed or direction I could feel the car heaving forwards, backwards or sideways, as appropriate, when I could really have done with it being more stable.

And it could have been that way with no alteration other than a reduction in ride height. That would have solved everything, and since Citroen can do such a good job of creating brilliantly-handling hot hatches, I'm not sure why it didn't happen with this car during the development process.

There are two other things that annoy me about the DS4, and they can't be fixed without starting all over again. One is the shocking lack of glass area, which is quite possibly a source of pride to the designers but makes manoeuvring the car ridiculously difficult. Especially when you're reversing it. When you're reversing it, you might as well be driving a van.

The other source of irritation is the amount of room inside. Now, I'm above-averagely tall, so I realise this won't be a concern to most people, but I have not driven such a cramped car in years. Even with the seat as far back and down as it will go it's almost easier for me to hug the steering wheel than to hold it, and to operate the pedals I have to sit in something nearer the lotus position than I consider seemly.  Space for rear passengers is almost negligible.

More positively, the DS4 went through the Euro NCAP crash test programme with flying colours in 2011, scoring 90% for adult occupant protection, 80% for child occupant protection and no less than 97% for safety assist. Not surprisingly, it was awarded five stars, though it would have lost one if tested this year because of its low 43% rating for pedestrian protection. 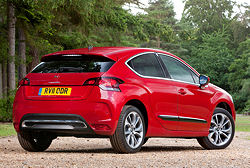 A DS4 Racing version has been shown in concept form, and has well as having a higher power output than any production Citroen (256bhp) it's also 35mm lower than the standard car, which should help greatly. At the time of writing it hasn't been confirmed that it will go on sale, but since there's already a DS3 Racing it seems reasonable to assume that it will.

Until then, there are three trim levels in the DS4 range, but the entry-level DStyle isn't available with the 160bhp diesel engine. The test car was in DStyle trim, and you can also go a step further to DSport if you're prepared to pay an extra £1000.

DStyles are also quite well-equipped, though, with dual-zone air-conditioning, a pollen filter, a ski flap in the middle of the rear seat, Bluetooth connectivity, an "invisible" radio aerial (matching the rear doorhandles, which are so well hidden that you'd swear this was a three-door car even though it actually has five), heated folding door mirrors, automatic headlights and wipers, combined leather/cloth upholstery and so on.

The standard wheels are 18" in diameter, but you can have 19s for extra money. Other options include full leather trim, the eMyWay satellite navigation pack (fitted to the test car, and rather good) and metallic/pearlescent paint.