Looking to buy a new Fiat 500? This buyer's guide gives you insight in things you'll want to know about the car such as design features, engines and equipment.

The modern incarnation of the Fiat 500 has been a big hit in the British car market since its arrival. So popular has it proved in fact, Fiat has been confident enough to create a wide range of models based on this icon such as the 500C convertible, 500L MPV and the 500X crossover.

The traditional hatchback, however, remains the best-selling 500 and recently it has received a raft of new components (over 1,900 in fact) which has kept the styling fresh, expanded kit levels and improved engine efficiency.

Here’s our buyer’s guide to the Fiat 500, where we cover areas customers are most likely to be interested in, such as design, trims, equipment, options and engines.

If you’ve already picked out a particular model to buy or are still looking for the right Fiat 500, you can get guidance when you use our service here at Car Keys.

The design and the way you can customise it is unquestionably one of the main selling points of the Fiat 500 hatchback. For autumn 2015 onwards, the 500 has been updated with various aesthetic changes.

The most notable of these include the new 3D-effect grille at the front and the chrome strip for the rear bumper.

Customers can choose a wide range of styling accessories for both the exterior and interior of their new 500. A notable example are the decal packs called ‘Second Skin’ which can alter the top half of the exterior quite drastically. Options for this sort of pack include Geometric, Comics and Camouflage. The latter, as the name indicates, adds a camo pattern to most of the Fiat’s body shell. Most Second Skin decals are priced at just under £800.

There’s also a wide range of finishes available for the seating, alloy wheels, the badges on the side of the car and even the cover for the car key. Buyers can add a sport strip to their 500’s exterior or get that and a few other accessories bundled together via a Sport Pack which comes in a few different colours.

The body paint colour selection for the 500 comprises of pastel and special pastel options, the latter of which are considered extras, costing just over £300. Only Bossa Nova White is free while other pastel paint jobs, including Pasodoble Red, Tech House Grey and Volare Blue, are a paid extra. There are also some metallic and tricoat paint jobs available optionally, priced at almost £500 and nearly £750 respectively.

If you have particular choices for colour in mind when it comes to the seats, body shell and wheel colour etc., it’s worth checking the car’s brochure in advance. That way you can be sure Fiat offer that particular combo. 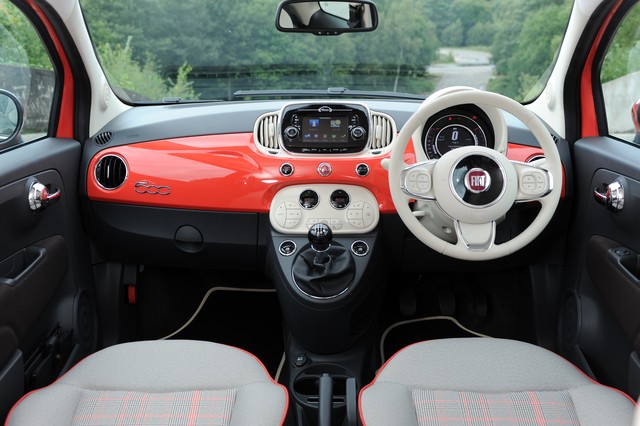 The order for trim levels with the latest Fiat 500 hatchback starts with Pop and is followed by Pop Star and Lounge. The Lounge trim is the one considered most likely to be chosen by customers, but what do the trims below offer?

If you want air conditioning in your Fiat 500 than you will have to step up to the Pop Star trim, or you can add to the Pop version for just over £500.

In terms of optional-only kit, a few added chrome finishes for the exterior can be added for under £100 for each add-on.

If you want a touchscreen system that supports satellite navigation it’s a £600 extra and if you fancy a larger seven-inch TFT screen display that’s a £250 extra. 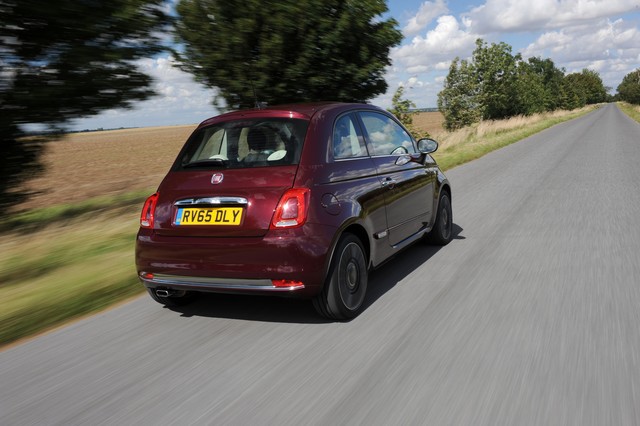 The engine range for the Fiat 500 hasn’t changed much over the years but, thanks to updates brought in for late 2015, the car is more efficient than ever before.

There’s a 69bhp 1.2-litre petrol engine, which is the only engine for the Pop trim and available for the other two. The Pop Star and Lounge trims also get a 0.9-litre TwinAir turbocharged petrol unit with 84bhp or 104bhp. A 1.3-litre diesel previously available for the 500 will join the refreshed range later in 2015.

The petrol units use a five-speed manual gearbox as standard, except for the 104bhp TwinAir which has a six-speed manual. A Dualogic automatic ‘box is an optional extra for all trims starting from £750. All engines also come with stop-start technology as standard, so when you’re stationary in traffic you can save fuel by putting the car in neutral temporarily.

Focusing more on the petrols, the 1.2-litre engine offers a reasonably amount of performance for city driving, where the 500 thrives the most. If having more grunt under the bonnet matters to you though, the TwinAir is the one to go for, especially in 104bhp guise.

The TwinAir is also the more efficient, returning up to 74mpg on average and CO2 emissions between just 88 and 99g/km (meaning free Vehicle Excise Duty). The 1.2-litre petrol is not too far behind though, averaging up to 62.8mpg and emitting between 105 and 110g/km. 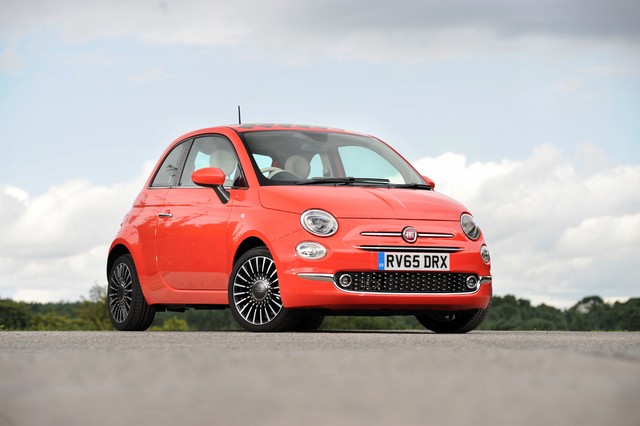 Bear in mind that if you pick enough of the optional styling kit you could end up paying way over £1,000 on your new Fiat 500 compared to the starting price.