We explain the importance of AdBlue and how to refill a car with it.

If you own or are planning to buy a modern diesel car, then it’s worth knowing about something that’s called AdBlue.

In fact, if you’ve refuelled a modern diesel car then you’ve probably noticed a blue cap next to the main fuel cap which reads ‘AdBlue’. Refilling this AdBlue tank is important if you plan to cover a lot of miles in a diesel car.

Major manufacturers including Mercedes, Citroen, Volkswagen, Audi and BMW use AdBlue for their diesel engines. Many buses and lorries use AdBlue as well.

AdBlue is a colourless, non-toxic liquid made of both urea and water. In a diesel car, AdBlue is injected into the exhaust gases to support what is called selective catalytic reduction (SCR) technology.

SCR is found on many modern diesel cars and makes a car’s exhaust gases less pollutant. It does this by breaking down harmful gases called mono-nitrogen oxides into nitrogen and oxygen. This ultimately allows the diesel engine to meet current Euro 6 emission regulations and AdBlue plays a big role in achieving this goal.

What to do if your car takes AdBlue

If you own a diesel car but you’re not actually sure if it takes AdBlue then there are several ways you can confirm whether it does or not.

The newer your diesel car is, the greater chance it will use AdBlue, but if you check your vehicle’s owner handbook then it should mention where the AdBlue filler cap can be found, assuming it has one.

If the AdBlue filler cap is next to the fuel cap then you probably won’t even need to check the manual, but in some diesel cars it may be located under the carpet in the boot instead. 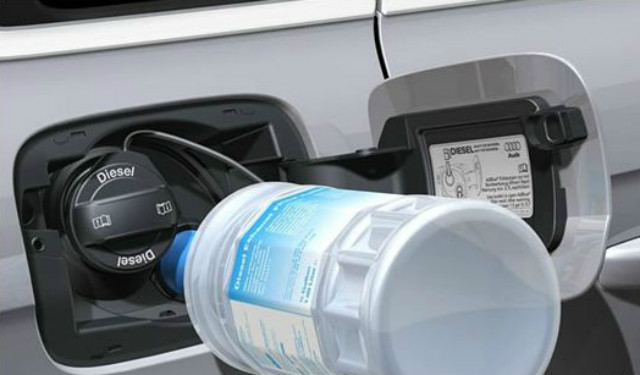 If your diesel car does indeed take AdBlue then chances are you will have to refill it from time to time. If you do a lot of miles, then chances are you’ll have to top up on AdBlue before the car’s next service. During a service itself, the car’s AdBlue will probably be topped up, but you shouldn’t just wait for this to happen if you’re running low.

When the car is running low on the additive, a warning message will appear on the dashboard to inform the driver of this. You’ll be warned about the AdBlue getting low way in plenty of time before It runs out. However, if your car does completely run out of the additive, it will fail to start up the next time you try.

How to fill a car with AdBlue

If you need to fill your diesel car with AdBlue yourself then it should be fairly straightforward but you should consult your car’s handbook first to understand the procedure. Buying AdBlue for a refill is really cheap and you can get it from dealers, retailer stores and online.

For some diesel cars you’ll need to put in at least about three to five litres of AdBlue to make the relevant dashboard warning light disappear. How much AdBlue your car can contain or consumes varies from model to model. In most cases, the AdBlue tank holds about 10 litres and consumption will likely be about 1.5 litres every 600-odd miles.

After filling a car with AdBlue, makes sure you rinse your hands. While AdBlue is non-toxic, it is corrosive and can cause irritation to your skin, eyes and lungs. If you accidently spill AdBlue on the car itself, be sure to rinse it off as soon as you can, since the liquid can damage paintwork.