The dark and violent history of the Michelin Man

Listed as one of the most iconic advertising mascots of all time by Business Insider, the Michelin Man’s adorably obese, benevolent appearance has charmed generations and helped establish Michelin as a household brand.

However, the character’s story is actually a lot deeper and darker than it first appears. For a start, the Michelin Man’s name is actually Bibendum, named for the Latin slogan ‘Nunc est bibendum’ which was taken from a collection of poems by Roman poet Horace, and which means “Now is the time to drink”.

And, although not many would realise it from his cuddly modern appearance, Bibendum used to be absolutely terrifying: a stone cold killer who slaughtered his rivals, smoked heavily and attracted violence and controversy wherever he went.

Prior to the character’s conception, Michelin at the time not only dominated the French tyre industry but was also one of the world’s leading advertisers. It was at this time that Michelin also introduced its famous guidebooks, which are still widely used by travellers, along with its star rating system for restaurants which has become the de facto standard by which the world’s best eateries have been measured ever since. 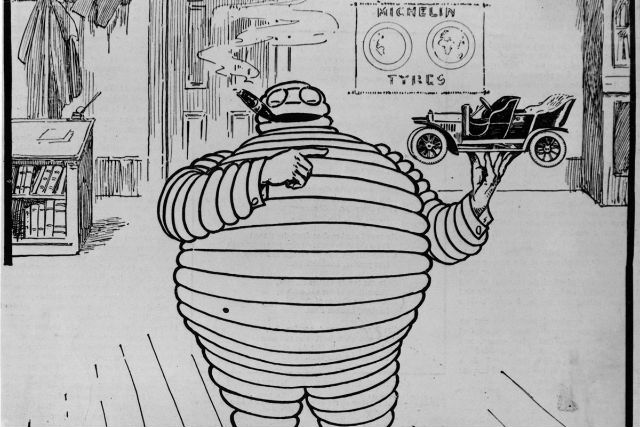 History of an icon

Created to be an overlord of the industry and a patriotic expounder of the French spirit at the time, Bibendum was conceived to appeal to the tastes of the burgeoning middle classes and convince them to adopt the automobile along with Michelin as their tyre maker of choice.

In 1898, André Michelin, one of the Michelin company’s eponymous founding brothers met French cartoonist Marius Rossillon who showed him a rejected poster he had mocked up for a Munich brewery, which depicted a large bearded man holding aloft a glass of beer. Accompanying the poster was Horace’s phrase: “Nunc est Bibendum”.

André immediately decided to co-opt the design and suggested replacing the man with a figure made from tyres after having spotted a pile of tyres four years earlier with his brother Édouard and remarking how it resembled a portly man with no arms.

The result was the first appearance of the Bibendum character, with a downright creepy layout that replaced the hirsute brewery punter with a corpulent figure composed of animated tyres and which held a glass filled not with beer but with nails and broken glass. 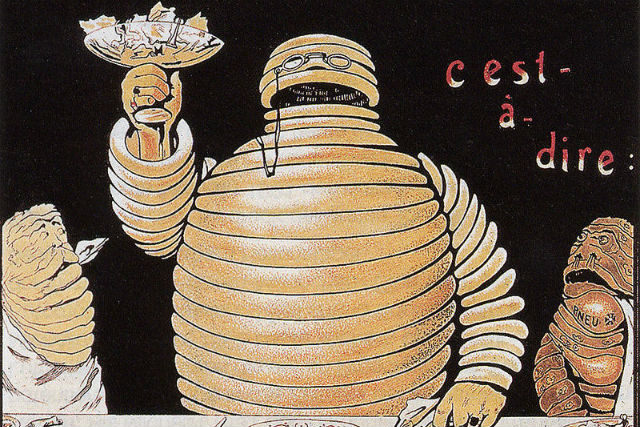 Surrounded by anaemic-looking, scrawny competitors, the idea was that just as Rossillon’s original character slurped down beer, Michelin’s tyre creature could drink up anything thrown at it and continue forward, obstacles and rival businesses alike.

Although he was always originally intended to be a creature of jollity, his design showed anything but. While we know him today as a bright-eyed, roly-poly ambassador of goodwill, in the original advertisements the Michelin Man was a grotesque, cadmium-hued phantom.

Sometimes, he chomped on a cigar like a corpulent villain. In other appearances, he wore an inauspicious-looking monocle despite the fact that Michelin wouldn’t give him any facial features save for his sinister gaping maw until late in the 20th century.

Powder white, on account of the fact that black tyres didn’t appear until 1912 when carbon was added to rubber mixtures to act as a preservative and strengthener, the original Michelin Man was composed of bicycle tyres, giving him a ropey, mummy-like appearance. 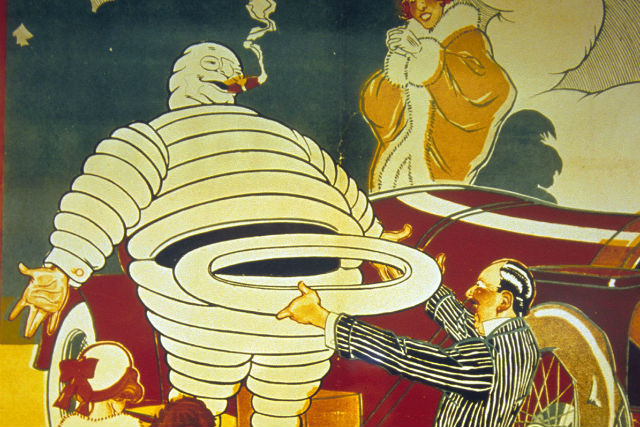 His rubber-fattened arms, distended and pendulous, were too big to hang by his sides, leaving him to adapt a zombie-like stance and, despite being dreamed up as a sort of pale white Kool-Aid Man, looked just as likely to abduct oncoming motorists and siphon their brains through a straw.

Still, that didn’t stop Michelin from using this basic character design for a full 15 years, during which time this frightful, tortured mummy creature appeared as a drunkard, a kickboxer and even as an incorrigible ladies’ man for the Italian market.

It’s important to remember that advertising in that era was very different to how it is today, and in the nascent tyre market, competition was brutal. As a result, so was the Michelin Man. One poster depicts him as a gladiator, one sandaled foot across the throat of a writhing, bleeding rival while three tyre corpses littered the Coliseum behind him.

Michelin’s rivals responded in kind, and one manufacturer of solid rubber tyres released posters of its own mascot about to drive a colossal nail through a cowering and defeated Bibendum, who is depicted wretchedly begging for his life. 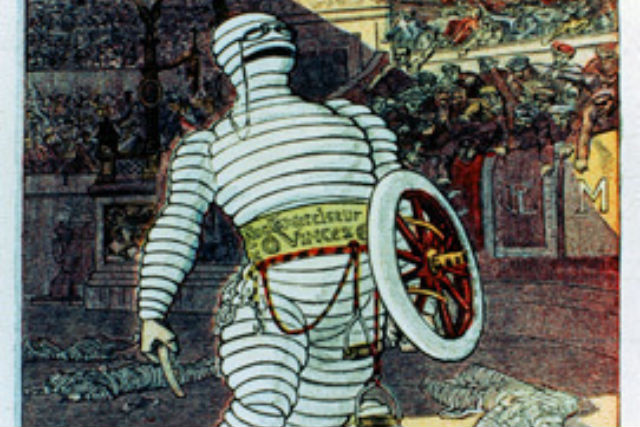 Everywhere he went, the spectral Michelin Man seemed to leave violence in his wake, even as early as his first public appearance at a Paris cycle show in 1898. André Michelin had brought a large cardboard cutout of the character with him and hired a cabaret comedian, hidden behind the scenes, to provide his voice.

According to reports, the crowd which formed around him was so large that rival companies became enraged, pushing and shoving so much that police had to be called in order to restore the peace.

Stranger still, in 1907 Michelin launched a travel magazine in Italy and gave the Michelin Man a regular column, ghostwritten by other writers. In one issue, he wrote of various ballroom dances he had attended and praised the local ladies, and in others reported on the crushing impact his own popularity was having on his rivals. Clearly, this early incarnation was a long stretch from the friendly-faced mascot of today.

Fortunately, with iconic status comes a certain responsibility to the public, and as Bibendum became more popular and increasingly widely-known, Michelin’s ad designers were forced to tone down his sharper edges. 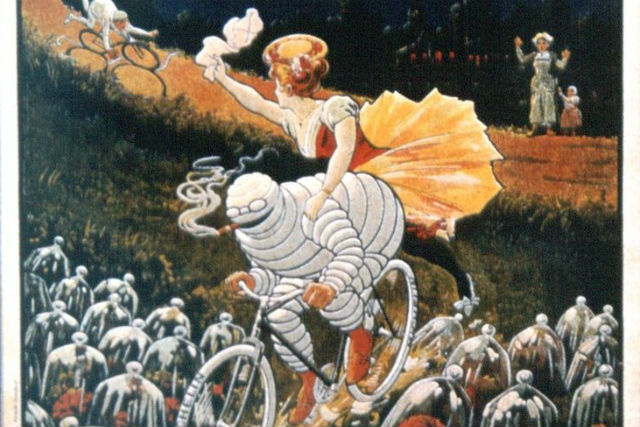 By the early 1910s the Michelin Man had given up killing and began to strike more playful poses, for example playing Frisbee with tyres or riding a bike, and increasingly defined himself as a motorist’s guardian angel rather than a vulcanised autocrat.

His behavioural modifications were complemented by physical ones. In an essay on Mickey Mouse, biologist Stephen Jay Gould observed that as company mascots become more popular, they tend to undergo a process known as neoteny, whereby they develop increasingly juvenile characteristics.

As a result, Bibendum’s head has grown larger relative to his body over the years, and after being given eyes those became increasingly larger as well. By 1925 he had ditched the monocle and during a tuberculosis epidemic in 1929, he gave up smoking too.

These days, the Michelin Man is pristine and smiling, with a trim and more muscular silhouette in response to concerns about obesity, and a million miles from the hard-living instrument of the occult he was originally depicted as. 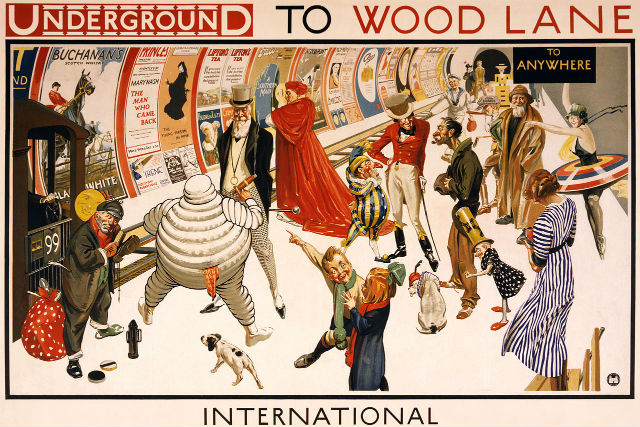 It’s amazing to think that Bibendum has been promoting tyres since 1898 and even more amazing still given his early exploits. Although he isn’t the oldest corporate mascot, having been beaten to the pip by the Quaker Oats Pilgrim who dates back to 1877, he’s still one of the best-loved characters in history.

Drawn, painted, sculpted, die-cast, injection-moulded and animated in more postures than thousands of his rivals put together, he even predates pop culture icons like Betty Crocker, the Jolly Green Giant and Mickey Mouse.

With a fluffy appearance and cute demeanour like the Stay-Puft Marshmallow Man, modern Bibendum kisses babies at motoring shows, embodying the words “rubber” with none of the kink and “Michelin” without the snobby, foodie connotation.

Let’s all be thankful, then, for this modern, cuddly and overtly amicable character. After all, it’s not that long ago that if you found yourself stranded in a dark wood with a puncture, the Michelin Man would have been the last person you would have wanted to see…