What's the biggest engine in the world?

Most vehicle engines these days are fairly similar. Whether it’s the flat-six in a 911 or Fiat’s dinky two-cylinder TwinAir, most of them follow tried-and-true engineering designs that have been honed over the past 50 years.

But not all engines are created equally. Some are nonconformist enough to raise an eyebrow, but then some are completely off-the-wall, shirt-eating insane. For anybody who thinks modern machinery is boring, think again.

From cylinders bigger than your body to rockets capable of breaking orbit, these are the biggest, most powerful and craziest engines ever to be dreamed up and stuffed under a bonnet. 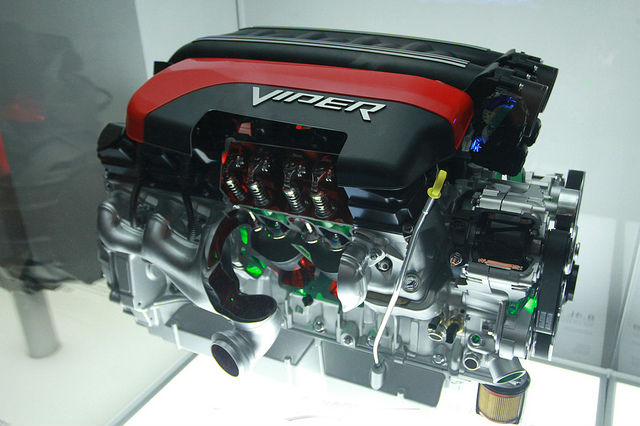 Currently, the largest car engine available on a production car is an 8.4-litre Viper V10 engine produced by Chrysler, which has been responsible for some of the most insane performance engines of all time, including the Chrysler Hemi.

The bone-stock V10 produces a massive 640 horsepower, which when fitted to a Dodge Viper can take it from 0-60mph in a blistering 2.96 seconds, before hitting a top speed of 205mph. 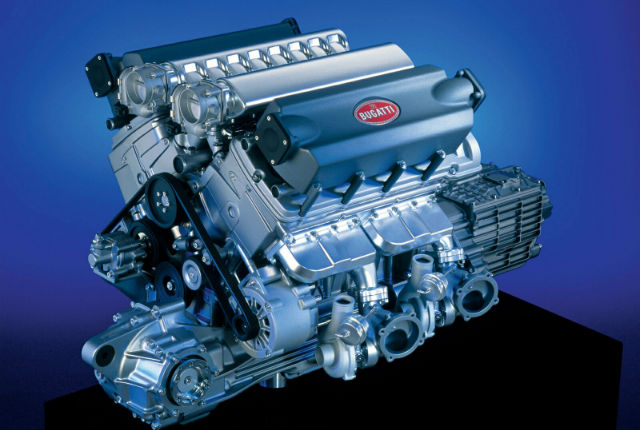 Although the Chrysler V10 is physically bigger with a larger displacement, the most powerful production car engine in the world is Bugatti’s 8.0-litre W16.

Not only is it the most powerful production engine ever, it’s also the most complex, boasting 64 valves, four turbochargers and enough pavement-shredding power to wrinkle God’s underwear.

Largest car engine of all time 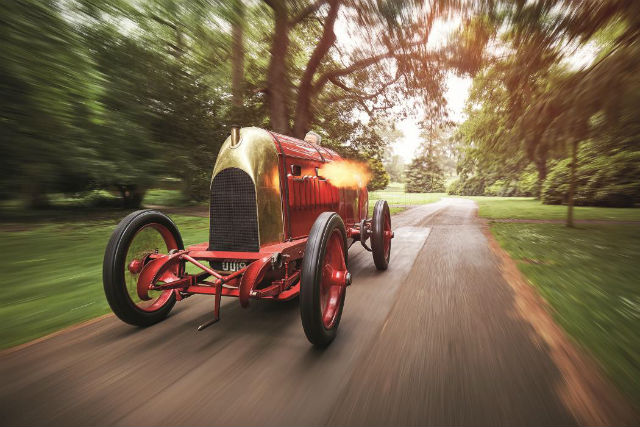 Still, while an 8.0-litre W16 might seem big to mere mortals like you and I, it seems little more than a toy when compared to the largest car engine of all time.

Officially, the largest car engine ever made was the monstrous 28.5-litre engine that belongs to the short-lived Fiat S76, which has been aptly nicknamed ‘the Beast of Turin’.

It’s hard to believe that the Beast was built all the way back in 1910 when it was manufactured to break the land speed record at the time. Generating upwards of 300hp, the engine in the S76 was larger even than that of a Spitfire.

It was so powerful, in fact, that Fiat had to connect the engine to the wheels via heavy-duty metal chains, and the Beast was able to hit a top speed of 134mph, an absolutely astonishing feat for its time.

Unfortunately, the S76 never officially met its land speed record target after being shelved after only a few trial runs thanks to the outbreak of the First World War. 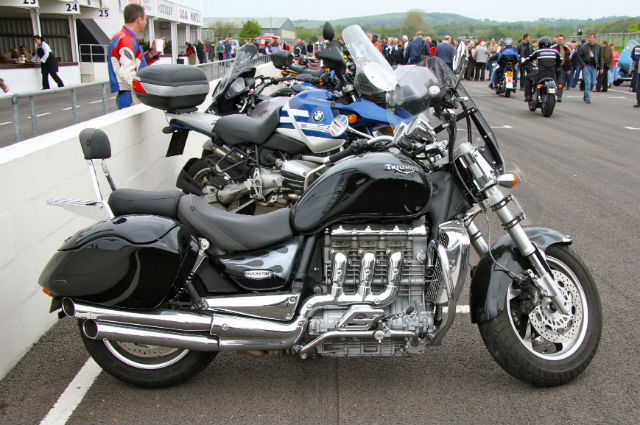 While you might be forgiven for thinking that the biggest motorbike engine would belong to some sort of Harley-Davidson chopper, it’s actually a British motorcycle which holds the record for largest power unit.

Although some manufacturers have tried such bonkers stunts as outfitting motorcycles with large car engines, officially the world’s biggest motorcycle engine belongs to the Triumph Rocket III, with a 2.3-litre displacement and output of 140 horsepower.

It mightn’t seem all that powerful compared to a lot of cars, but when you consider how much smaller and lighter a motorcycle is than a car, you can start to understand just where the Rocket gets its name from. 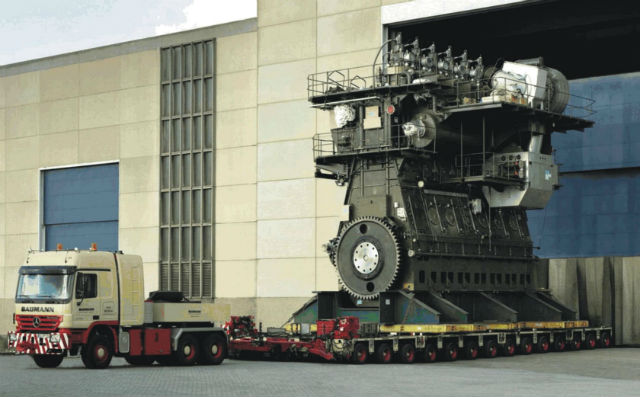 If you think that some of the previously-mentioned engines are big, you ain’t seen nothing yet compared to the world’s biggest diesel engine.

Not just the biggest diesel engine, it’s also the biggest conventionally-powered combustion engine on earth, and its name is the Wärtsilä-Sulzer RTA96-C. Standing at 89 feet long and 44 feet wide, it’s bigger than many houses and has a colossal displacement of 25,480 litres.

To put that in perspective, that’s around the same size as 16,000 Ford Fiesta engines. It’s configurable with six to fourteen cylinders and can generate an absolutely mental 107,389hp with more than 7,000,000Nm of torque.

Designed to power some of the largest sea-faring vessels in the world like large container ships, this gargantuan engine consumes 39 barrels of heavy fuel oil an hour and costs around £22 to run each and every minute.

The most powerful engine… Ever 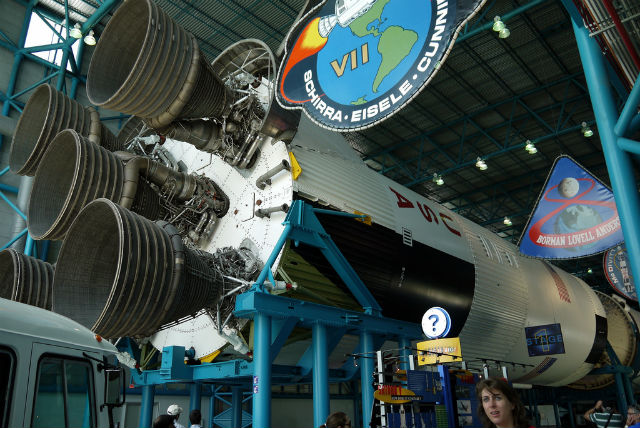 For a truly huge achievement, you need a truly huge engine and the F-1 engine designed for the Saturn V rocket was the biggest that’s ever been made.

While we’re maybe slightly twisting the rules here (the F-1 is a rocket, and not a conventionally-fuelled engine like you’d find in a car), it’s still the most powerful engine ever conceived by man.

A total of five F-1s were affixed to the Saturn V rocket, making it the tallest, heaviest and most powerful rocket ever brought to operational status, despite it being 50 years old.

It still holds the world record for the heaviest payload launched from the Earth and has so far been the only rocket ever to launch people to the moon, starting with the Apollo 11 mission in 1969.

Each engine measured in at 18.5 feet tall, while the rocket itself measured a total of 363 feet tall in total. Powered by a mixture of liquid oxygen and kerosene, the F-1 generated an unthinkable 190 million horsepower.

It was so powerful and so loud that the launch of the Saturn V rocket could be heard for hundreds of miles around when fired up on the test stand.

Imagine you’re a 1950s carmaker being pitched a new, experimental engine concept. Some German dude named Felix rolls into your office and tries to sell you on the idea of a three-pointed piston that spins around inside an oval box.

It looks like a ball of fire in a bingo cage, or a football rattling around the inside of a washing machine, but not only does it run, it actually happens to run incredibly well.

The engine works via a triangular rotor that spins within a housing and creates three chambers than are responsible for the four phases of the engine’s power cycle: intake, compression, power and exhaust.

Horsepower outputs are high relative to the engine’s displacement and it’s also extremely balanced, though on the other hand it does suck fuel like nobody’s business thanks to the elongated combustion chamber.

Still, weird it may be, but the Wankel rotary engine powered many cars over the years, including the Mazda RX-8 sports car. Although the RX-8 is no longer available, Mazda has recently been strongly hinting at a replacement and you know what? It’s even got a Wankel engine…